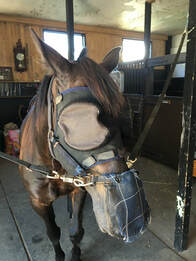 Here are the results of an Equine Headshaking Syndrome case I had in the summer of 2018.  The treatment schedule went from mid-June to the end of July, and the horse had an extreme photosensitivity.  Although the manual releases helped a great deal in the beginning, those results gradually tapered off so I introduced the cold laser element.  After trial and error using both the array (the larger pad), and the probe, it was determined that the probe made the biggest difference, so treatment centred on that and it eventually led to a full resolution of the issue.

Background on the horse:  15-year old gelding, retired Standardbred trotter, no longer in work.  Starting headshaking in the spring of 2017 but was managed with a fly mask.  In the spring of 2018, however, it worsened considerably to the where a full mask and nose cover were needed for him to go out in any sun whatsoever (see pic on right).  With no mask, he had very evident discomfort as demonstrated by snorting, shaking his head and scratching his face on his leg (see first video).  He would stay in the run-in shed or hide his face behind the butt of a paddock friend to avoid the sun.  He would only be comfortable on overcast days.  Other therapies that his owner tried included: allergy meds, PEMF, acupuncture patches, vitamin supplements, and other traditional potential HS remedies.

After the cold laser was introduced, he was gradually able to withstand longer and longer periods in full sun without a mask.  He has been 'back to normal' since his final treatment at the end of July.  This will be revisited in the coming months as spring/summer approach.